Vigour: Medium, around 25–30% less than GF–677, although with a well-developed root system.
Compatibility: Good with varieties of peach, nectarine, almond and some varieties of Japanese plum.
Structure: Erect, similar to Garnem.
Yield: Highly productive.
Size: Anticipates ripening by 3 to 7 days depending on the variety. Produces good-size fruit.
Adaptability: It adapts very well to all climates, but especially to warm conditions (low chilling area).
Other features: Green leaf rootstock. Rigid stems (early lignification) with little or no branching in early development stages. Easy handling in nursery.

Vigour with respect to Garnem* 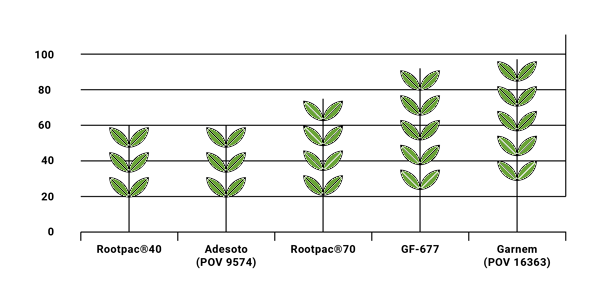 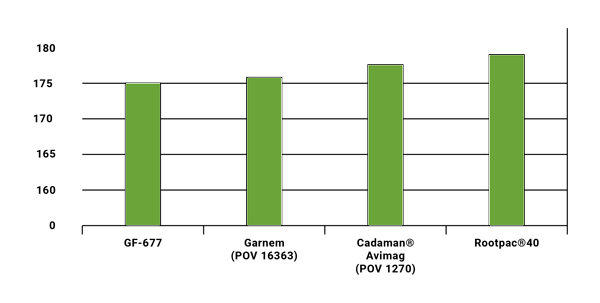 * The data are obtained from different geographical areas (Tarragona, Murcia and Seville) for the 2005 and 2007 harvests.

We use our own and third-party cookies to analyze user navigation, personalize content and ads, offer social network functions and analyze traffic.

Press the ACCEPT button to confirm that you have read and accepted the information filed. If you want to modify the cookie settings, press MODIFY CONFIGURATION.

After accepting, we will not show you this message again.

You can allow, block or delete the cookies installed on your computer by configuring the options of your Internet browser. In case you do not allow the installation of cookies in your browser, you may not be able to access some of the services and your experience on our website may be less satisfactory.

In the following links you have all the information to configure or disable your cookies in each browser:

These cookies allow the website to remember choices you make (such as your user name, language or the region you are in) and provide enhanced, more personal features.

They are used to improve the browsing experience and optimize the operation of the website, such as storing service configurations, or storing the purchase made in a shopping cart.

These cookies can be from the site itself or from third parties, they help us analyze the operation of the web and create a profile of our customers.

They are those that collect information about the ads shown to the users of the website.